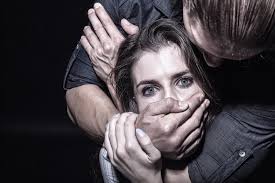 When we get back with abusive men, and let me talk about trauma bonding for a moment first, trauma bonding simply means that if two people have shared a highly emotional experience together, it gives them a unique bond and perhaps even a false sense of a depth of bond and a false sense of shared history. The more intense the experiences the more deeply it could be said to burn into a person’s unconscious, so if you compare a pleasant evening out between a nice couple, where they go and they have a nice meal, and then they go to the cinema and then they come back, and they have quiet but nice sex for 15-20 minutes and go to sleep in each other’s arms. That’s all very nice and it’s very lovely.

Whereas if you compare that to going out, getting drunk and seeing your girlfriend dancing with another man. The young couple, they’re together, the guy sees the girl dancing with another man and because he’s a nutcase, he flips out starts screaming and have a big scene in the club. He gets tossed out the club by the doorman, the police are called and he’s fighting with lies outside. The girlfriend screaming then, he takes her home and they have a screaming row, and he punches her a few times, and then they’re both still drunk and, I’m not saying that Rihanna and Chris Brown were, but I’m giving you an example of how trauma bonding works and, the intensity of emotional experience and then they have rabid sex, because they’re in this highly charged emotional, highly vulnerable, very very raw state.

That is trauma bonding, the original term trauma bond, I came across it through psychology, though I am a psychologist, but I came across it during my period as a paranoid conspiracy theorist and I’ve read about it in relation to “mind-control”, in terms of “psyops” and “Satanism” and I’m using these inverted commas because I am not sure nor convinced at all that satanic cults exist, in quite the way that they are portrayed in any real sense.

Also this whole thing about “psyops” and people, innocent civilians being dragged off the streets and then their minds broken so that they can become mind controlled assassins. I also would take a lot of that stuff with a fairly large pinch of salt but keep an open mind as I always keep an open and critical mind. Trauma bonding in that sense, as I first came across it was through saying, well look if you want to mind-control somebody you get them as a child, and they alleged in this piece that I was reading, this is what Stanek mind-control cults associated with the CIA would do, raises eyebrow and a way to imagine it is if you take a child, and you slap them around and shout at them and scream at them so that they’re frightened. You leave them poorly nourished and so they’re a little bit dazed and confused, and then you lock them in a dark cupboard for eight hours, which is an intensely frightening experience. You are the abuser if you did that, that in the child mind they would associate your voice and the size of your face to feelings of pain and suffering, and that should create resentment.
However if you come back to the child after eight hours of isolation in a dark cupboard and release the child from the dark, and then feed the child and speak nicely to the child, you are then also the rescuer, so then the child has intense feelings of gratitude and of warmth and love towards the person who is abusing them.
That’s trauma bonding. Where else do you see it? I think where it was fictionalised very nicely and very cleanly, was in George Orwell’s 1984 where the main character, who I can’t remember if he has a name in the book or not. If he’s named or not but anyway, the main character the main protagonist, is being tortured by the main character in the film, by John Hurt, and the torturer is Richard Burton, and they very nicely, both in the film and the book, conveyed a sense of almost like, a weird love that develops between the tortured, for the torturer, when the torturer is framed as being education. “I’m doing this for your own good” This is the kind of thing he usually will say, and to the the abused  “I’m doing this to teach you a lesson, I’m doing this to drive the devil out of you” if it has a religious context.

The many religions around the world will do that, and there was a death in the UK in London, not that long ago, of people who drowned, not their own children, they were children that they were they were left there to look after. After days of beating them and torturing them, they eventually drown one of the kids in the bath, and believing that they were possessed by evil spirits, and although they instantly claimed “all we were trying to do is drive the evil spirits out” and still going to jail and rightly so.

So that’s trauma bonding. You need to understand and have compassion for people when they behave like this for family members. I have direct experience of this on both sides of the fence.  I was in an emotionally abusive relationship, but I didn’t really realize it until months went by. It became a source of irony to me though over the years. I was like, you know, I was actually going through it but didn’t know, and so this has become, and I don’t want this to be a gender specific thing, this tends to be made a thing that men do to women and I don’t want to feed into that discourse. I don’t want to feed into that paradigm because it’s fallacious and it’s not helpful. Women are just as capable of being abusive. When they’re the abuser it is psychological and emotional rather than physical, but we all use the weapons that we have available to us do we not, and certainly whether it’s a man doing it to a woman or it’s a woman doing it to a man.

I’ve got mates, in two cases I can think of of female friends or in lesbian relationships, where they were being abused by their female partners, but they were their female partners that were adopting the role of the male and were knocking around punching them, and it’s very very frustrating as a friend or family member to stand outside. I’d say why are you being such a dick, why don’t you just leave them, so it’s about having that compassion.

Trauma bonding is only one element of it – let me wind the clock back again and one of the things that motivated the creation of this “why do women get back with abusive men”. Rihanna and Chris Brown had this situation about this bust up, and Larry King was talking about domestic violence on his show on CNN, and I was watching it and they brought a woman in who ran the main charity for battered women in America, who actually look after the battered women and protect battered women, give them somewhere to stay, give them legal advice, all the rest. Larry King or one of the other guests just asked a simple question to this woman, who they assumed was an expert on the psychology of abusive relationships and domestic violence. Why do women stay with abusive men, and she didn’t know. She stopped it.

I was watching this and I was like, I know what, how and why these things happen, but it’s not common knowledge. I don’t think people commonly understand why it happens and very frequently, when you try and talk about this type of stuff on YouTube, you get YouTube comments like, well women are just dumb and well you know, women aren’t that bright they lack an ability to think critically, and all the rest of it.

All right, well hang on a second, speaking as a man who had a degree in psychology, he was a master practitioner of NLP and generally speaking is quite a switched-on sort of character, I got suckered into holding the usual relationship with a narcissist, and literally couldn’t see the word for the truth, so I really doubt that intelligence is a factor. I know plenty of intelligent and well-grounded, switched-on people both male and female, who are or have been in and are still in abusive relationships in one form or another.
Now the reasoning why people stay in abusive relationships is down to a lot of different things, and it’s a lot simpler and perhaps a lot crueler than we would like to think but, trauma bonding certainly is a factor in it, and it’s something that should be understood that it is worth talking about.
So just to recap so you walk away from this feeling like, hey, I know what one of the reasons is. One of the reasons is trauma bonding. Trauma bonding is all about an intensely emotional shared experience, so if you have any intensely emotional set, like a near-death experience with somebody you will find yourself instinctively and naturally and unconsciously bonding to them. In the same way in abusive relationships and Stockholm Syndrome, as its sometimes called, the bond that develops between the kidnapper and the kidnapped, and the torturer and the torturer, the victim, especially when the abuse and the torture is framed as reeducation, you have impure thoughts inside of you. “We need to burn them out with you” and that kind of thing, and so that is trauma bonding.
There are other factors why people get back into and stay in abusive relationships, like simple things like love. You may have heard of it but you know, love is pretty addictive, and sex and very often abusive relationships tend to be a lot more sexually intense, and that sex can be extremely addictive because it’s very physically and psychologically gratifying.