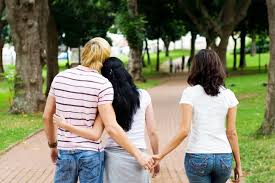 We all know that some men can be as good as gold while others are the complete opposite. We’ve read about them in the media and heard about them from friends, and we all know that players are guys we want to avoid when it comes to the dating scene. To avoid getting burned, here are 14 tips to easily identify a player.

His eyes are always on the move
We can’t walk around blindfolded and no one expects us not to notice an attractive individual when we’re out and about, but a player’s eyes are consistently wandering. When a player sees an attractive girl it’s likely he’ll lose complete focus on you and will have no type of cool about himself. Eyes will wander, but when wandering becomes consistent staring, there’s a problem.

Communication comes and goes
Not everyone can be glued to their phone but with a player you’ll quickly notice that communicating throughout the day is hit or miss. One day you’ll be texting back and forth for hours and the next day you don’t hear a peep from him. Inconsistent communication is a big red flag.

He sweet talks you immediately
Some guys are just naturally sweet but until there’s some sort of emotional connection, most guys aren’t calling you pet-names or ringing your phone to say goodnight. If the guy you like is calling you baby and whispers sweet nothing into your ear, it may all seem nice, but it’s a trick. He’s talking you into letting down your guard and hopefully getting into his bed.

He’s overly friendly and flirtatious with others
There isn’t a thing wrong with being nice to people and for some being friendly is just their personality. However, a player will make flirtation and friendliness his best known skill. Clearly he’s using flirtation to make sure every woman he meets remains a possibility.

He’s overly friendly and flirtatious with others
There isn’t a thing wrong with being nice to people and for some being friendly is just their personality. However, a player will make flirtation and friendliness his best known skill. Clearly he’s using flirtation to make sure every woman he meets remains a possibility.

He always keeps you waiting
Does the guy you’re interested in agree to a date but cancel at the last minute? When you do go on a date is he often late? Does he refuse to respond to emails and texts from you? If so, he clearly thinks you aren’t worth his time and his schedule comes first.

The answer to every question is “maybe”
He’ll maybe have time to see you tomorrow. He’ll maybe be able to come over and watch a movie for the night. When maybe becomes his go-to answer for nearly everything, maybe he’s a player. Okay, he most likely is a player.

His friends are unknown
He talks a lot about his friends, boys, and his guys, but you have no clue what their names are. With this lack of detail, he clearly wants to keep his life private and separate from you. This is a big sign that he doesn’t want to let you get too close.

You aren’t friends online
Like many people these days, the guy you’re interested in probably has an account on Facebook, Twitter, or Instagram. You’d think that by being together, he’d want to become e-friends too. But, if you’ve tried friending him and been denied, he clearly doesn’t want to socialize out of the time he sets aside for you.

You’ve never been invited to his place
Dates are always out somewhere or at your place. When you ask to get to see where he lives, he sternly gives you the big N-O. His room and his place remains a complete mystery to you. When a guy down right refuses to let you have a peek of his crib, he’s hiding something.

He won’t answer the phone in front of you
Yes it’s rude to talk on the phone when you two are together but when the phone does ring, he takes the call to another room. Other times he’ll ignore the call saying it’s no one important. At the end of the day, he won’t talk on the phone with you around because it’s probably another girl on the line.

He only comes to see you late at night
Though you’ll take what you can get, having a guy that only wants to see you at ungodly hours of the night is problematic. He’ll come over after he goes to the bar with his boys. Time is nice but at the end of the night it’s all just a booty call.

Not all men are players, there are good ones out there !!!